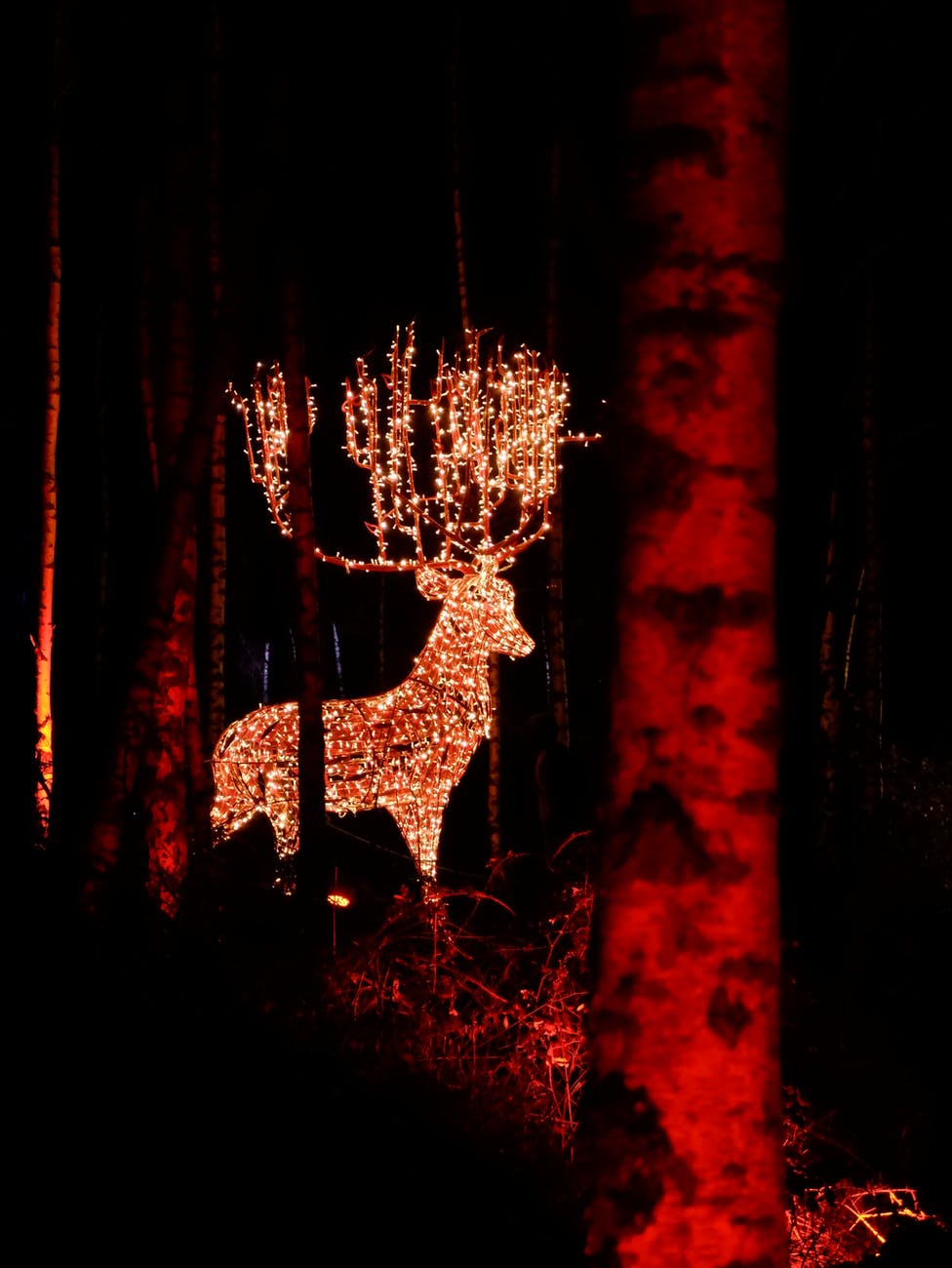 Once upon a time, an unusual and beautiful deer was born in the forests near Benares, in northern India. Although he was as big as a young colt, it was easy for his mother to give birth to him. When he opened his eyes, they were as bright as sparkling jewels. His mouth was as red as the reddest forest berries. His hoofs were as black as polished coal. His little horns glistened like silver. And his color was golden, like a perfect summer’s dawn. As he grew up, a herd of 500 deer gathered around him, and he became known as King Banyan Deer.

Meanwhile, not far away, another beautiful buck deer was born, just as splendidly golden in color. In time, a separate herd of 500 deer came to follow him, and he was known as Branch Deer.

The King of Benares, at that time, was very fond of eating venison. So he regularly hunted and killed deer. Each time he hunted, he went to a different village and ordered the people to serve him. They had to stop what they were doing, whether plowing or harvesting or whatever, and work in the king’s hunting party.

The people’s lives were upset by these interruptions. They grew fewer crops, and other businesses also had less income. So they came together and decided to build a large deer park for the king, at Benares. There he could hunt by himself, with no need to command the services of the villagers.

So the people built a deer park. They made ponds where the deer could drink, and added trees and grasses for them to eat from. When it was ready, they opened the gate and went out into the nearby forests. They surrounded the entire herds of Banyan and Branch deer. Then, with sticks and weapons and noise makers, they drove them all into the deer park trap, and locked the gate behind them.

After the deer had settled down, the people went to the king and said, “Our crops and income have suffered because of your hunting requirements. Now we have made you a pleasant safe deer park, where you can hunt by yourself as you like. With no need of our aid, you can enjoy both the hunting and the eating of deer.”

The king went to the new deer park. There he was pleased to see the vast herds. While watching them, his eye was caught by the two magnificent golden deer, with large fully grown antlers. Because he admired their unusual beauty, the king granted immunity to these two alone. He ordered that they should be completely safe. No one could harm or kill them.

Once a day the king would come and kill a deer for his dinner table. Sometimes, when he was too busy, the royal cook would do this. The body would then be brought to the chopping block to be butchered for the oven.

Whenever the deer saw the bow and arrows, they went into a panic, trembling for their lives. They ran around wildly, some being injured and some wounded, many suffering great pain.

One day, King Banyan Deer’s herd gathered around him. He called Branch Deer, and the two herds joined for a meeting. King Banyan Deer addressed them. “Although in the end, there is no escape from death, this needless suffering due to injuries and wounds can be prevented. Since the king only wishes the meat of one deer per day, let one be chosen by us each day to submit himself to the chopping block. One day from my herd, and the next day from Branch Deer’s herd, the victim’s lot will fall to one deer at a time.”

Branch Deer agreed. From then on, the one whose turn it was, meekly surrendered himself and laid his neck on the block. The cook came each day, simply killed the waiting victim, and prepared the king’s venison.

One day, the turn fell by chance to a pregnant doe in Branch Deer’s herd. Caring for the others as well as herself and the unborn one, she went to Branch Deer and said, “My lord, I am pregnant. Grant that I may live until I have delivered my fawn. Then we will fill two turns rather than just one. This will save a turn, and thereby a single life for one long day.”

Branch Deer replied, “No, no, I cannot change the rules in midstream and put your turn upon another. The pregnancy is yours, the babe is your responsibility. Now leave me.”

Having failed with Branch Deer, the poor mother doe went to King Banyan Deer and explained her plight. He replied gently, “Go in peace. I will change the rules in midstream and put your turn upon another.”

And the deer king went to the executioner’s block, and laid down his own golden neck upon it.

A silence fell in the deer park. And some who tell this story even say that silence also fell in other worlds not seen from here.

Soon the royal cook came to kill the willing victim on the block. But when he saw it was one of the two golden deer the king had ordered spared, he was afraid to kill him. So he went and told the King of Benares.

The king was surprised, so he went to the park. He said to the golden deer, still lying on the block, “Oh king of deer, did I not promise to spare your life? What is the reason you come here like the others?”

King Banyan Deer replied, “Oh king of men, this time a pregnant doe was unlucky enough to be the one to die. She pleaded for me to spare her, for the sake of others as well as her unborn baby and herself. I could not help but feel myself in her place, and feel her suffering. I could not help but weep, to think the little one would never see the dawn, would never taste the dew. And yet, I could not force the pain of death on another, relieved to think it was not his turn today. So, mighty king, I offer my life for the sake of the doe and her unborn fawn. Be assured there is no other reason.”

The King of Benares was overwhelmed. Powerful as he was, a tear rolled down his cheek. Then he said, “Oh great lord, the golden king of deer, even among human beings, I have not seen any such as you! Such great compassion, to share in the suffering of others! Such great generosity, to give your life for others! Such great kindness and tender love for all your fellow deer! Arise.”

“I decree that you will never be killed by me or anyone else in my kingdom. And, so too, the doe and her babe.”

Still the golden deer did not raise up his head. He pleaded, “So the deer will be safe, but what will the other four-footed animals do?” “My lord, from now on they too are safe in my land.” “And what of the birds? They too want to live.” “Yes, my lord, the birds too will be safe from death at the hands of men.” “And what of the fish, who live in the water?” “Even the fish will be free to live, my lord.” So saying, the King of Benares granted immunity from hunting and killing to all the animals in his land.

Having pleaded for the lives of all creatures, the Great Being arose.